The Club - About Us

The club Raumfahrthistorisches Archiv Bremen e.V. (in short: RHA), Germany was founded on May 26th, 2000 and is registered by the local Bremen District Court. 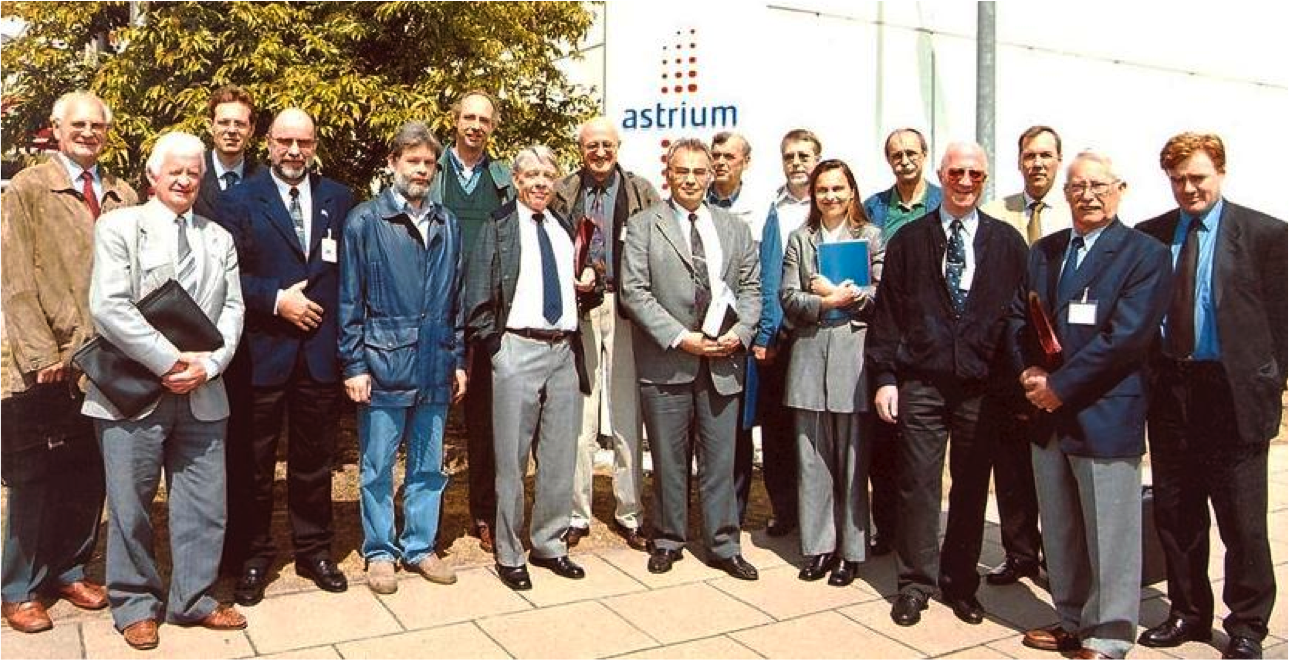 The club was founded at the end of a long process which started
shortly after the creation of the Deutsche Aerospace AG (DASA)
in 1989 as a subsidiary of the Daimler Benz AG. A circle of leading
specialists in the fields of archives and museums worked out a
concept of a DASA company archive.

(© RHA: Founder members of the Inaugural Meeting in year 2000)

The long-tradition companies of the German national aerospace industries - finally consolidated into DASA - proposed to the DASA Management Board essentially a de-centralized structure of the company archive due to the manifold technical developments at the different sites.

The Management Board adopted this recommendation as a board decision on November 8th, 1993. According to the decision, the business divisions were directed to establish and maintain de-centralized historical archives in order to preserve historically-relevant documentation as a company legacy. The concept of the DASA company archive is oriented towards the ideal of the Mercedes-Benz-Archiv in Stuttgart-Untertürkheim. Thus, comprehensive enterprise archives with both technical and commercial documentation were established in the various DASA business divisions, including Bremen. These archives meet the retention periods imposed by laws and by the customers for the assets archived. After expiration of the deadline the assets will be destroyed to a large extent.

In order to safeguard those documents which are precious for the history of the company, the DASA Management Board decision highlights the necessity to implement a historic archive in addition to the existing company archive for the Space Infrastructure division. The needed premises, including the required infrastructure and material resources, did not appear to be a major problem. However, the provision of company personnel for the workload became an immediate cost issue since at least 2 full-time employees would have to be appointed for this type of work.

In this situation the stagnated process of establishing a historic archive received a new stimulus from outside: Hans E.W. Hoffmann, being a member of the company since the foundation of ERNO in 1961 -with the exception of his assignment as ELDO director- and serving as managing director in the seventies being of vital importance for the success of the ERNO Raumfahrttechnik, offered his private collection of documents from his occupational career for inclusion into the historic archive to the former Head of Marketing and External Relations, Dr. Werner Inden. Christina Kläne, the Manager of the company archive, who supported the implementation of a historic archive from the early beginning on adopted the proposal of Hans E.W. Hoffmann and - as a start - transferred his compilation into the company archive. Thus, the foundation of the historic archive was laid. Following the invitation of Winfried Selke in the same month, a number of Space Infrastructure employees met as “Circle of Initiative for Space History” in order to consolidate and successfully complete initiatives relating to Space Infrastructure history. The first get-together of the circle of initiative took place on May 13th, 1998. The members were: Christina Kläne, Claus Cohrt, Stephen Ransom and Wilfried Selke. Ulrich Bremer, Hans-Martin Fischer and Franz-Herbert Wenz joined the year after.

On September 26th, 1998 both business divisions of Daimler-Benz Aerospace in Bremen - Airbus and Space Infrastructure - planned a big family day on the company premises located in the Hünefeldstraße. To the members of the circle of initiative this event seemed to be a perfect occasion to visualize the space history in Bremen on large modular display systems in combination with a manifestation of the company archive. The promoter of the family day provided an area of 100 m² for this presentation. The planning of the archive presentation as well as the development with regards to content was jelling rapidly. The reaction of visitors who paid a visit to our stand in the Airbus Hall 20 was encouraging us to be on the right track with respect to implementation of a historic archive. In the very same year 1998 an important matter of consequences was the cooperation between the historic archive and the “Stedinger Verlag”. The Head of the Business Unit “Programmes and Marketing” Dr. Werner Inden had tasked the former “Head of Propulsion” Helmut Hopmann in Ottobrunn with the documentation of the history of propulsion in the corporate group. The outcome of this activity was the book “Schubkraft für die Raumfahrt” (Thrust for Space) whose publication was put out to tender. Following an objective evaluation process of proposals received from notable German publishers, the “Stedinger Verlag” in Lemwerder was selected in October 1998 based on its highly competitive proposal featuring a particularly innovative printing technique. A reviewer’s copy of this book which was later awarded internationally was already handed out by the “Stedinger Verlag” in April 1999. Until today its very quality serves as a standard for a series of publications being issued by the RHA since 2001 (Note: the “Stedinger Verlag” has gone out-of-business end of 2017. Successor publisher is the “Kellner-Verlag”).

In spring 1999 the “Circle of Initiative Space History” resumed its work which basically began in 1998. Meanwhile it became evident that only by engagement of voluntary members and in particular retirees the open issue of labor costs for the operation of the archive could be resolved. Moreover, due to many years of work in company ventures and projects the advantage and benefit of alumni is the fact that they have a good overview on the historic value of the compiled documents and data and are able to segregate among the essential and the non-essential.

The company employees who initially joined the circle of initiative were willing to perform these tasks. After due considerations concerning the embodiment of the project “Historisches Archiv”, the organization of a registered Club with defined rights and duties of the active archive members was agreed upon in order to establish explicit legally binding conditions.

The reasons were, among others:

The club “Raumfahrthistorisches Archiv Bremen e.V.” is headed by a Management Board which was elected once a year during the annual general meeting from its foundation until 2018. After a rennewal of the Statutes in 2018 the Management Board is usually elected every 2 years. - Board meetings take place regularly.